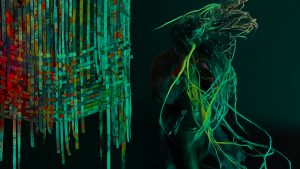 Richard Kennedy CROSSFADES & HARD CUTS – In his performance, US artist Richard Kennedy (*1985) explores the visual transitions between moving images that occurs in art film and Commercial cinema. He takes up the Dalmatian character from Freak Orlando and uses the exhibition as a backdrop but also as an archive, exploring different ways of refusing and obscuring the colonially influenced gaze.